It is not new country versions we are releasing at this time, but only new languages that will result in all text being translated into that language but still run on the selected country version in the same way that English can be chosen as the language for all country versions.

The language of a user can be changed under: Settings -> Subscription -> Users -> Language as shown here. Don’t forget to log off and on again to activate your language selection: 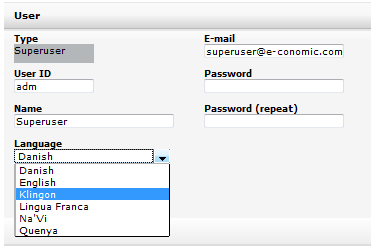 You can go to our youtube channel to see a help video on how to change the language of a user. More languages will follow soon.

“Get started with e-conomic” webinars will be held in each of the new languages. Sign up here.

2 Comments to “Releasing new languages and currencies – on popular demand”